In the heart of the island’s rugged interior Sri Lanka was forged and this holiday showcases its rich cultural history as you explore the ancient cities, icons and temples that paint a rich tapestry and were at the centre of the distillation and development of a young country.

Day 1: Depart on a choice of flights to Colombo, Sri Lanka.

Day 4: Private transfer to the Cutural Triangle for 3 nts

Depart on a choice of overnight flights to Colombo. Direct flights are with Sri Lanka Airlines from Heathrow, otherwise there are a range of one stop options with such airlines as British Airways, Qatar and Emirates.

On arrival you’ll be met by your private guide and transferred north to the ancient city of Anuradhapura that will take approximately 4.5 hours. Alternatively break your journey with 1 night on the beach in Negombo, just 30 minutes from the airport. On arrival check-in to your choice of hotel for 2 nights. The rest of the day’s free to recover from the journey.

Now a slightly sleepy town, but once Sri Lanka’s first capital, Anuradhapura flourished for 1,300 years until the Indian invasion in 993AD. It was established around a cutting 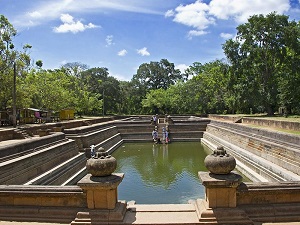 said to be from the fig tree under which the Buddha sat and gained enlightenment. It now sits as one of the world’s oldest continuously inhabited cities.

On today’s private guided tour you will discover what made this such a special place and laid the foundations for modern day Sri Lanka. Close to the Malvathu Oya River the vast complex boasts a rich collection of archaeological and architectural wonders: three colossal tanks (reservoirs), towering bell-shaped stupas (dagobas), the remains of a palace, Isurumuniya Vihara rock temple and the Royal Pleasure Gardens.

What makes it special is that it’s still alive and relevant, as some of the temples are still used as places of worship, particularly during poya (full moon) days when those visiting wear white. Travel out further and you’ll find the surrounding area supports a series of monasteries. 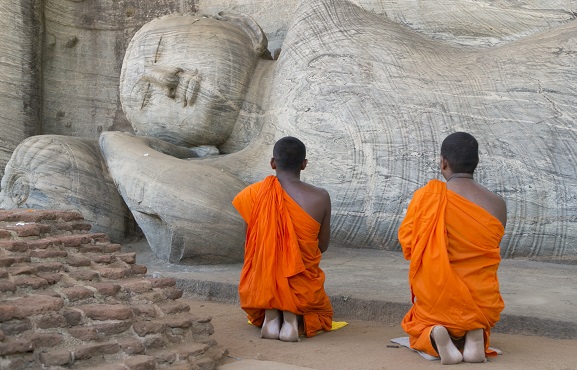 Morning free to further explore under your own steam and then early afternoon leave with your guide for the 1 hour transfer into the Cultural Triangle. On arrival check-in to your choice of hotel for 3 nights and the rest of the day’s free.

Within the Cultural Triangle you have a range of places to base yourself during your stay and we’d be happy to discuss this with you. With some much to do in the area it’s the perfect place to spend a few days.

The area around Habarana and Sigiriya is ideal for those looking to have easy access to the culture of rural Sri Lanka. This morning join your private guide for a walk down small rural roads and sandy tracks to explore village life and gain an insight into their lifestyle, culture and hospitality. The economic bedrock of the communities is agriculture and you will have ample opportunity to see the rice fields, vegetable farming, bee keeping and much more depending on the time of year you visit. Interspersed amongst the fields you’ll see makeshift tree houses from which farmers keep watch and drive-away the wild animals during the night. You may have the chance to climb up and see for yourselves.

As your walk around the village your guide will expand on what you see and you’ll be invited into a home for a refreshing cup of Ceylon tea served with a piece of jaggery (a sweet brown sugar made from solidified palm sap). 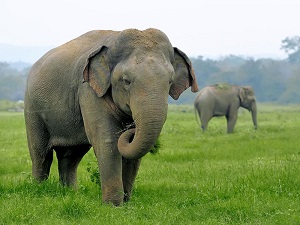 Moving through the village you’ll see everyday life including fish vendors selling fresh-water fish from the nearby lakes, grocers making their rounds with hand-pushed carts and family clay brick making industries using traditional wood kilns. This is a great introduction to a side of the country that’s slowly disappearing but remains a vital part of Sri Lanka’s cultural character.

Return to your hotel in time for lunch and then re-join your guide for an afternoon jeep safari through Minneriya National Park which is 30 minutes away. Located between Habarana and Polonnaruwa, the 8,890 hectares of Minneriya National Park consists of mixed evergreen forest and scrub areas and is home to favourites such as sambar deer, leopards and elephants. The park’s main attraction is the ancient Minneriya Tank (built in 3rd century AD by King Mahasena) and is often the best place to observe the elephants who come to bathe and graze, as well as huge flocks of birds (cormorants and painted storks to name but a few) that come to fish in the shallow waters. Back at the hotel early evening.

This morning your private guide will collect you for a tour of the Lion Rock of Sigiriya, one of Sri Lanka’s seven UNESCO World Heritage sites and a must see in any visit to the Cultural Triangle as a testament to ancient artistry and architectural ingenuity. Built in the 5th century by King Kasyapa as a fortress and pleasure palace it dominates the surrounding landscape, rising 200 metres above the ground. 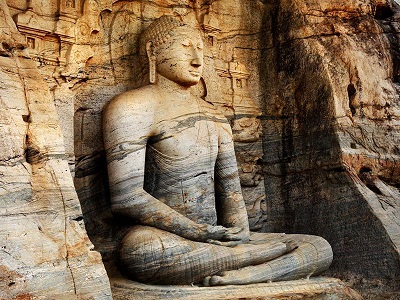 The entrance to the original fortress was through the mouth of a lion, however the ravages of time mean that only a part of the massive paws remain today. The view from the flattened summit of the rock is spectacular and well worth the climb, but those without a head for heights can stroll around the ramparts and pleasure gardens, or take in the famous Sigiriya frescoes that can be found partway up the rock.

From here you continue on to the ancient capital of Polonnaruwa: a UNESCO World Heritage site built over one thousand years ago alongside the spectacular, carefully-engineered reservoirs that provide the region's water to this day. Lunch can be enjoyed in a local restaurant (own expense). In its day Polonnaruwa was a thriving commercial and religious centre and as you stroll around the ruins you’ll get a feel for what life was like back then. The tour will include the statue of the great Sinhalese King Parakramabahu who built the reservoirs and the city's well preserved ruins. Notable highlights include the fascinating area known as the Quadrangle and the impressive Gal Vihara, with four separate Buddha images perfectly sculpted from one large piece of granite. Back at the hotel early afternoon.

After breakfast your guide will pick you up for the 2.5 hour transfer to the Ancient Capital of Kandy, stopping at the Dambulla Cave Temple en route. This UNESCO World Heritage Site dates back to the 1st century BC and the cave system has been in continuous use for over 2000 years. First used as a refuge by an ancient king, who on regaining his throne commissioned magnificent carved images within the living rock. Later kings made further additions and the caves contain over 150 images of the Buddha, the largest of which is a colossal figure spanning 15 metres. Cave inscriptions from the 2nd Century BC are found and on the walls are many paintings most of which belong to the Kandy period (early 19th century). This temple is the perfect place in which to see the evolution of ancient Sri Lankan art and is an important historical site due to the amalgamation of material from many eras. From here continue on to Kandy and check-in to your choice of hotel for 2 nights.

Day 8: Kandy (B) - Private City Tour including Temple of the Tooth 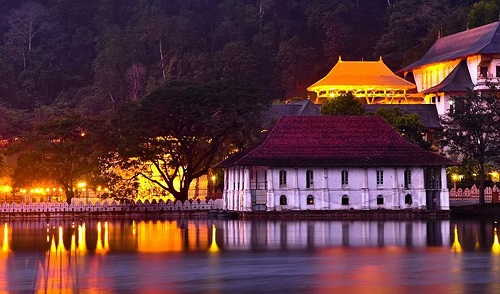 that was the capital from 1592 until the rule of the British in the 19th Century. Now a UNESCO World Heritage site, it's an extremely picturesque setting with steep, green valleys running away from it in all directions. This afternoon’s highlights will include the Peradeniya Botanical Gardens that’s modelled on Britain's Kew Gardens, the Temple of the Tooth Relic where Buddhists believe they have enshrined a tooth of the Lord Buddha and the 88 foot tall Bahiravokanda Vihara Buddha Statue that looms protectively over the city and offers panoramic views over Kandy. Soak up the views before returning to your hotel. 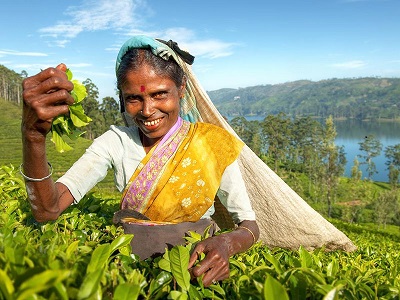 rising out of Kandy up into the hills that are famous for Sri Lanka’s majestic tea plantations. En route visit a tea plantation and a tea factory where you will be taken through the manufacturing process to learn how some of the best tea in the world is produced. From here carry on to Nuwara Eliya and check in to your choice of hotel for 1 night. Nuwara Eliya is colloquially known as ‘Little England’ and does have a lot of Colonial character, with a village post office, an English church & the St Andrew’s golf club, along with the race course.

Travelling by car in air-conditioned comfort has a lot going for it, but swapping this for the train allows you to immerse yourself more into Sri Lanka life, and from Nuwara Eliya

to Ella riding the rails offers the best views of the tea estates, forests, waterfalls and village life. This morning your guide will take you to the station, make sure you get on board and then meet you at Ella station. The journey takes about 4 hours as you follow the beautiful curves and ridges of the hill country landscape.

Time for lunch in Ella and then it’s time to leave the hills behind for the 4 hour drive to the capital Colombo. On check-in to your choice of hotel for 2 nights. Evening free to enjoy Colombo’s thriving night life including some of the best restaurants in the country.

This morning your private guide will collect you for a tour of Sri Lanka's capital. Colombo is a fascinating city that preserves the colonial edifices left after colonial retreat, but is fast developing its own personality and modernising apace. Today you’ll explore the city on foot and by car and include visits to the 100-year-old Colombo Fort Clock Tower, Galle Face Promenade, Pettah bazaar, Hindu & Buddhist temples, Colombo museum and the Bandaranaike memorial international conference hall. Back at the hotel mid-afternoon.

Day free until your airport transfer and overnight flight home.

Each featured itinerary is really a starting point from which to create your ideal holiday.

We can include as much or as little as you like, mix and match hotels, excursions and experiences, add extra nights and change the destinations you'd like to visit.

The common thread is that each is a privately guided holiday, allowing you to travel where and when you want, with your own private transport and dedicated guide.

The hotels below are there as examples, designed to act as a starting point from which to create your holiday. There are plenty of alternatives to choose from and when we quote we will include other suggestions so we get to understand your likes and dislikes. Quite often clients mix and match hotel categories throughout their holiday.

Let us do the work

Each price is a guideline for a private (non group) holiday including flights from the UK.

Please view each suggested itinerary as the starting point from which we can create a holiday around your interests, that travels at your pace and hits your budget.

When quoting we'll offer a range of options to learn what you like and dislike and develop the holiday from here.

It all starts with just a call or email.